Counsellor by Celia Aaron
My rating: 3.5 of 5 stars 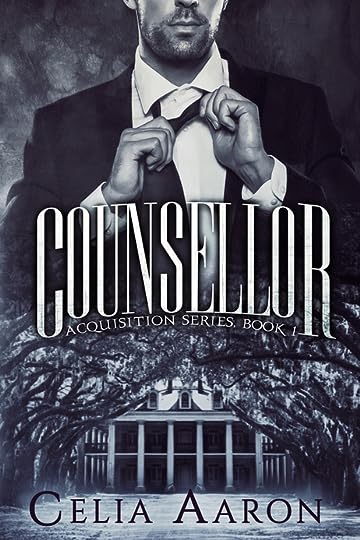 Counsellor is the first installment in the Acquisition series by Celia Aaron.

Although Acquisition wasn’t an original concept, it still reflected the brutality in an intense way. I liked the darkness this book divulged. The story was well written and had a twisted way of pushing the boundaries of the characters as well as of the readers.

Stella Rousseau is an artist, who meets the powerful and wealthy prosecutor Sinclair Vinemont and finds herself trapped in the sick games of the rich and ruling people of Louisiana. She’s gorgeous, feisty, determined, strong and loyal to a fault. But she has a backbone of steel and fiercely fights the darkness that tries to engulf her.

Sinclair Vinemont, a district attorney, is one of the most powerful men in Louisiana. He’s ruthless, cold, dangerous, dominant, and effortlessly beautiful. He’s is a part of a depraved trial called the Acquisition which represents the power, greed, and the most primitive depravity of the human mind. He means to win this game and Stella is his plaything in it all, his key to claim the prize. He’s the Acquirer and she’s his Acquisition.

“I’ve never been a good man. My darkness is neither restrained nor buried. It lives right at the surface. The only thing that hides it is my mask.”

He’s also the man who prosecuted Stella’s father and shattered her whole world. He wanted her from the moment he laid his eyes on her. He wanted to own her, possess her, and exploit her. He sets his pieces in places and manoeuvres Stella in a contract she can’t refuse. And Vinemont is the devil she must sell her soul to save the one she loves.

One year, Acquisition trials, pain, violence, humiliation, and torture… that was the deal she signed for. Inadvertently, Sinclair and Stella finds themselves caught up in raw, angry, and passionate heat. But their world is full of corrupted, depraved, perverted and greedy lechers. They have to play by the rules to win the traditional game of this society.

“He was a prison made of flesh and blood. My very own cage.”

Angst factor was high and kept the story simmering in raw heat. Stella wants to hate Sinclair for trapping her in his world of darkness. Sinclair wants to own her, to use her to achieve his ultimate goal. But lines are blurred and boundaries are pushed. He strikes at her heart and forces himself into her soul and she possesses him and claws her way into his core.

“He was possessing me, branding me far more than any ink on my neck or any scars n my back. His touch, his insistent kiss marked me deeper, surer than any lash ever could. I was betraying myself. I knew it. I didn’t care.”

I liked this book but it had striking similarities to the Indebted series by Pepper Winters that was hard to ignore. Where the cruelty in the latter ripped my heart out, this book barely managed to scratch the surface. But it held my attention and the connection I felt with the characters and the writing was too strong to give up.

This has a cliffhanger ending and secrets and darkness are yet to unfold.

View all my reviews

A Ruthless Proposition by Natasha Anders

Stalking is always in!

Don’t miss out anything Bookish!